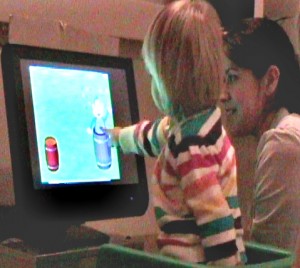 Adults and children whose cannot process sounds quickly are at risk for language learning difficulties. We studied healthy English-speaking children from 24 months to 48 months of age, to develop a test of individual children’s speed of auditory processing. Such a test might offer a way to identify toddlers at risk for emerging language development delays.

We developed an interactive computer game in which toddlers were taught to touch one of two monkeys who “sang” different songs (low-low or low-high tone pairs). By varying the speed of the ‘songs’ we could determine how much time children needed to discriminate the songs. Later, children completed two standardized tests of vocabulary comprehension and production. 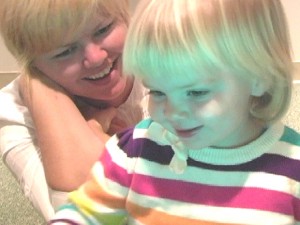 In this preliminary study (Avanzino, Robledo-Gonzales, & Deák, 2014), 15 children completed our Test of Auditory Processing Speed (TAPS) for Toddlers. The 11 children (mean age = 39 months) who completed follow-up language measures showed a positive correlation between TAPS accuracy and receptive vocabulary (PPVT), and between TAPS accuracy and expressive vocabulary (EVT). However, neither correlation was statistically significant. Consequently, it is unclear whether the TAPS test can provide behavioral evidence of early auditory processing differences that predict language learning outcomes.

Back to Word Learning and Child Language