Joint attention episodes set the stage for infant learning. In many cultures and contexts, infants and children learn to attend to whatever adults attend to. This helps children learn their group’s language, social routines, and practical skills. When do infants learn to follow adults’ attention and monitor their actions? Most research on this question has studied how infants follow adults’ gaze direction and pointing gestures. There are not trivial achievements. People almost always look at, and towards, something, but not necessarily something interesting. Similarly, adults often move their arms, but not usually to point at things. So infants must figure out which of parents’ actions are informative, and which are not. 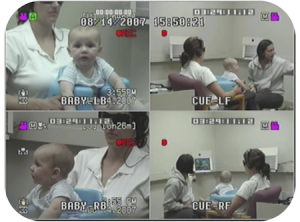 Some researchers claim that infants can follow gaze 3 months of age, or even right after birth. However, these claims are not supported by strong data. Our results suggest that infants younger than 6 months almost never follow adults’ gaze. In a longitudinal project we tracked infants’ gaze- and point-following from 4 through 12 months. To rule out that infants did not follow because they were uninterested, we chose video reward-stimuli that infants found especially appealing,, and taught infants that they could see videos on some monitor — if they used a cue to predict where the video would appear. Thus, we motivated infants to follow gaze or points, if they were able. No study had ever controlled for infants’ motivation. We did the study in a special testing room with multiple monitors and multiple cameras to record where infants looked. 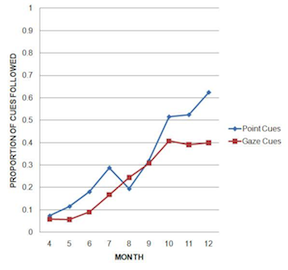 Our preliminary results show that infants gradually got better at following gaze and points, but even at 6 months they were not very skilled. However, they show a sort of ‘learning curve’, generally improving month by month. This is exactly what we would expect if, as we predicted, infants learn to follow attention through long weeks of experience interacting with their parents.